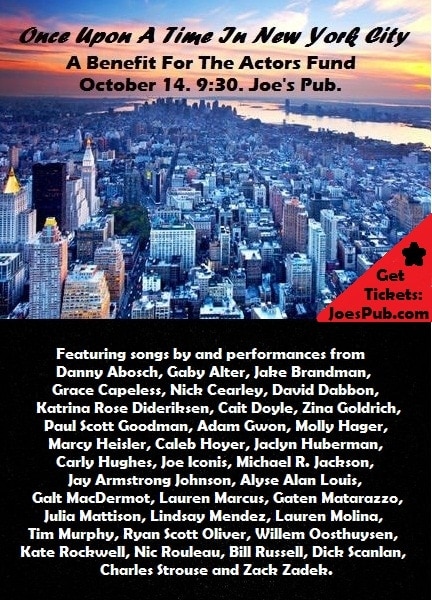 I am honored to have been invited to write a brand new song for the upcoming “Once Upon a Time in New York City” benefit concert at Joe’s Pub. The song, entitled “Real New Yorkers”, was written specifically for this event, and will be performed by Kate Rockwell, who is currently starring on Broadway as Skylar in “Bring It On: The Musical”.

Once Upon a Time in New York City, a benefit concert featuring new material from emerging songwriters celebrating the city of New York, will be offered Oct. 14 at Joe’s Pub.

For the 9:30 PM concert, which will benefit The Actors Fund, musical theatre writers — ages 19-90 who were born everywhere from Kansas City to San Francisco to Montreal — will write a song about someone who has changed their idea of New York City.

The concert is created by Hoyer and Jennifer Ashley Tepper, creators of If It Only Even Runs A Minute.

Joe’s Pub is located at 425 Lafayette Street. There is a $12 food/drink minimum. For tickets, visit JoesPub.com.