“Waiting In The Wings” Released on DVD, Sequel Announced

“Waiting In The Wings: The Musical,” the award-winning movie musical featuring two songs by Danny Abosch, has been officially released on DVD. The film is also available for streaming and digital download. Since its debut in 2014, “Waiting In The Wings” has picked up awards at film festivals all over the country, including “Best Musical” from the Manhattan Film Festival and “Best Feature Film” from the Central Florida Film Festival, QFlix Philadelphia, and Rhode Island International Film Festival.

According to production notes, “Waiting In The Wings: The Musical” follows two entertainers, destined for the big time, who are mismatched in a casting office from two very different online contests. Tony (Adam Huss), a stripper from New York, is cast in an Off-Broadway musical and needs to trade in his tear-away trunks for tap shoes and tights. Anthony (Jeffrey A Johns), a naive musical theatre enthusiast from Montana, needs to decide if he can strip all the way down just to stay in town. Hilarity ensues as they realize that in order to “make it” they’re going have to learn some new tricks. Shirley Jones, Sally Struthers, and Lee Meriwether round out this heartwarming homage to Broadway with some delightful cameos.

A sequel, Waiting in the Wings: Still Waiting, has been announced and is currently filming. In addition to the return of cast members Sally Struthers and Lee Meriwether, the film will also feature television legends Edward Asner and Bruce Vilanch. The film is also slated to feature more original music by Danny Abosch.

To purchase the film, and for more information, visit http://www.witwthemusical.com/ 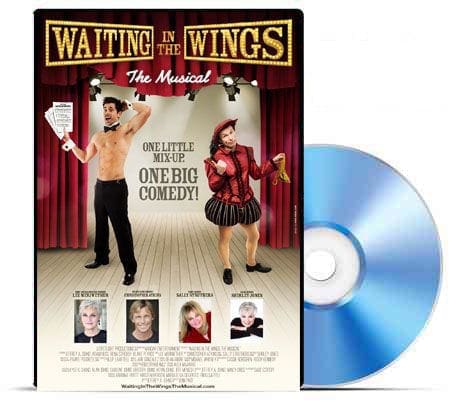 There are 2 comments on “Waiting In The Wings” Released on DVD, Sequel Announced